For a few years, my husband and I have been trying to get our oldest to start reading the Harry Potter series. I don't know if it was the size of the books, all the made up words, or the subject matter, but he just wasn't feeling it. He started Harry Potter and the Sorcerer's Stone a couple of times but it never caught his interest.
A couple of months ago, that all changed. We gave him the first book again, and for some reason he was hooked. He read it quickly, followed by the second, and now he's almost done with the third. Yay! I love to get him interested in a series so it keeps him reading. (Moms you know what I mean, right?!)
So for Christmas he got all of the movies on DVD. We started watching them all in order and even our littler boys loved them. 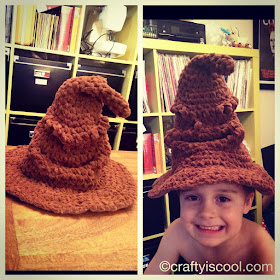 Saturday morning my youngest little boy asked if he could paint a Santa hat brown. Odd request, sure, but I've heard stranger. He explained that it was going to be a Sorting Hat from Harry Potter. *Lightbulb* I suggested that instead of making a messy crusty mess, I'd crochet him one! Luckily it only took about an hour, maybe an hour and a half, and he had his own Sorting Hat!
Now you can make one! It goes pretty quickly. The first one I made with soft chenille yarn and an N hook. It worked great except it was a little floppy. I love the texture though, and the floppiness was easily remedied by lining the brim with brown felt. I stuffed the top of the hat too, and added a felt lining to the inside (because my son kept just yanking the stuffing out and it was driving me crazy!). Next I thought I'd experiment, so I made it again with double strands of standard worsted weight yarn (I used Vanna's Choice in Chocolate). It was definitely sturdier but not as stretchy I suppose. It didn't need to be lined or stuffed. You choose which way you want to do it!

Techniques:
Adjustable ring - Make a ring, insert hook into front of ring and pull up loop through to front of ring, chain one stitch, sc into ring as directed in pattern, pull tail gently to close ring

Note:
Numbers in () indicate number of stitches at the end of that round.
Pattern is worked in unjoined spirals.
Use a locking stitch marker to keep track of rounds. At the end of each round, move marker to loop on your hook.

* To make a larger hat, continue increasing by 3 sts per round until the hat reaches the size you want. Continue on as instructed below, adjusting stitch counts for each row. 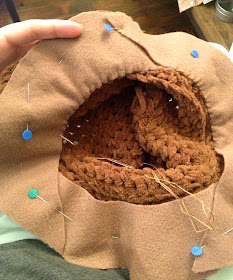 If your hat is too floppy on top, insert polyester fiberfill. Cut a circle of felt to fit inside just underneath the eyes of the hat. Stitch into place with brown thread. Make sure not to put the felt circle too low or the hat won't fit onto a head.

Now get to sorting!